Today at breakfast (we'd been staying at a hotel while our floors were getting finished at home):

Boy: This hotel is made out of pork chops and steak!
Me: How do you know that?
Boy: I read it online!

I'm a 3rd degree connection to Barack Obama on LinkedIn.

Those of you who have a nearby Wegmans that's a special, exciting grocery store don't appreciate that in Rochester, it's just a regular grocery store.

I went shopping yesterday. I wanted to drive to the "nice" Wegmans near my in-laws since they have a better selection. Last year when I did this at Christmas, I thought I knew where it was, but I didn't. I went the wrong way. Thing was, it was no big deal because I just ended up at another Wegmans and shopped there. This year I made sure I got directions. 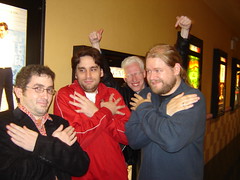 DSC04210
Originally uploaded by Jedimentat44
Okay, you know the game. Name this band. Although it looks like they (update) fired the ironically eyeglassed prettyboy since the last time I saw them.

All the anti-gay marriage questions are winning right now, as well as a gay adoption ban in Arkansas.

At least South Dakota is doing the right thing.

Voted just before 7 this morning. In my comfortable suburban district there's never any problems, or any line. It was busier than usual but by no means crowded.

I took the kid. He took a very big interest in coming with me. He double checked my choices and pushed the "Cast Vote" button (he even noticed I went off-ticket in a local race).

I've been thinking a lot about my aunt. We lost her this spring. She was 92 and lived in Florida. We were going to visit her for the last time when she passed away. While visting with my cousin (there was to be no service, just cremation and spreading of her ashes back in Sicily), she told me my aunt had been giving $25 a month to Obama since he announced his candidacy. My aunt was an amazing woman for a lot of reasons, and the thought that she had seen something in Obama worth committing to really meant a lot to me. So in a way, my vote was for her too.